Robin Hood and the Forest 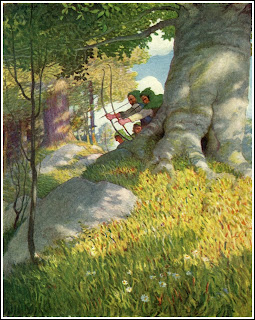 (I realize this isn't specifically and totally about Shakespeare... but he's in here... I promise. More than that, though, this is a muse on Literature in general. And because I can, I'm putting it up here.) :-)
I went for a stroll in the forest the other day, got lost and haven’t made it out yet. It all started with Robin Hood, although the forest was not Sherwood. It was the Forest of Literary Criticism.
I don’t suppose I should be surprised that Robin led me thither: his, after all, is one of the Old Stories. References to Robin Hood date back to the 13th century, and he has featured in tale and story ever since. Even Shakespeare mentions the famous outlaw, comparing a banished duke and his entourage to Robin and his Merry Men in As You Like It.
But it wasn’t the evolution of an epic or the staying-power of certain tales that led me off the path and into the Wild Woods, although I will admit to wandering up those paths along the way.
It was clichés. 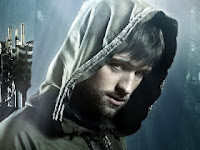 Email ThisBlogThis!Share to TwitterShare to FacebookShare to Pinterest
Labels: As You Like It, Cymbeline, Lear, Lit Theory

This list is for me as much as it is for anyone else. I'm trying to find a way to keep track of all the productions I want to see. People keep telling me that I should put all this in one place, so here are the upcoming productions of Shakespeare in the Portland area (at least, the ones I can find; if you know of others, please let me know!):


Cymbeline -- Portland Center Stage -- through April 8th.
http://www.pcs.org/cymbeline/
I've already seen it once, and will see it again...
Here's my review of Cymbeline.

Much Ado About Nothing -- Northwest Classical Theatre Company -- March 23 - April 22
My review of Much Ado can be found here.

And then it appears there's a dearth of Shakespeare in May... but things really pick up in the summer.

Measure for Measure -- Northwest Classical Theatre Company -- June 22 - July 15
This is what I thought of it.

Much Ado About Nothing -- Willamette Shakespeare --July 28 - August 19
My review: Not Much Ado

And I know there will be more announced later. :-)
Posted by Katie at 3:34 PM No comments: