Fun and Frustration in Romeo and Juliet

This has been an odd summer. I’ve been working weekends, which means I don’t get to as much Shakespeare as I would like, and also, when I do get to it, I don’t often have the time to write up my thoughts on what I saw right away. So I’ve been forced to rely on an overtaxed memory to write this review… which doesn’t seem fair to the production. On the other hand, it means that this is about the things that really stuck out to me instead of incidental details. So maybe it’s not ALL bad after all.

Now that we have the disclaimer out of the way, on to the review. I am not a huge Romeo and Juliet fan. Never have been. I could never understand why it was touted as the world’s best love story. It’s not! It’s a pathetic love story… and not pathetic in a wonderful romantic way, either. Pathetic in a “well that was dumb and look what it got you into! If either of you had an ounce of maturity or common sense, you’d both still be alive right now” way. But I went to see Willamette Shakespeare’s production because the cast list and director looked pretty amazing. And I’m so glad I did.

I thoroughly enjoyed it. Well… as thoroughly as one can enjoy a tragedy where you kind of want to throttle whoever was responsible for the tragic outcome. But even that means that the actors made me care enough about what was going on to be upset when things go sideways.

I was especially impressed with Chris Ringkamp’s Romeo. He was a totally believable love-struck sap… not too over the top, but enough that from time to time you remember he was just as “deeply” in love with Rosalind at the beginning of the play. His reaction to seeing Juliet at the balcony was priceless.

Tamara Burgess’s Juliet was also quite good. She did an excellent job convincing me she was 13, which is so important to the believability of the story itself. And she was very much in love… I particularly liked the way she couldn’t just say goodbye to Romeo at the end of the balcony scene, but kept calling him back to tell him something else.

For all the tragedy waiting in the wings, I found the first third of the production hysterically funny. Of course, that’s the typical love-struck idiots part before the full weight of their messed-up families comes into play.

Juliet was obviously closer to the Nurse (Mindi Logan) than she was to her mother. In fact, Lady Capulet (Meredith Ott) felt very much like a socialite who had never had much time for her young daughter until now when suitors are starting to hover. She doesn’t give Juliet much reason to bring her woes to her or confide in her.

And that brings me to my main take-away from this production – tragedy strikes when teenagers are left to sort out the world on their own. They should have had someone with more wisdom and experience to help them navigate the world… but instead all they get from their parents is more problems because of the feud. The Nurse and Friar Lawrence (Tom Mounsey) aren’t any help, really. But their parents are distant and distracted, so they have no recourse.

Romeo and Juliet may never be my favorite play, but thanks to director Matthew Pavik and the cast, I can see its merits and understand a little better its high place in Shakespearean circles. I still don’t  think it’s an exemplary love story… but as a story about two very broken and messed up families, it has a lot going for it. 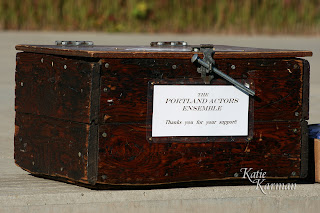 Because I'm going to try to be better about making it to local Shakespeare, I've once again compiled a list of what's happening when. Many of the local colleges (MHCC, PCC, Reed, PSU, George Fox) don’t have their theatre schedule up on their web sites yet, but I'll try to update this closer to the beginning of the school year, if any of them are doing Shakespeare. (I'll also update this with links to my reviews... if and when I write them!)

And on a completely random note... how in the world are we getting so many productions of Cymbeline lately? In 2011, Northwest Classical did it... and then in 2012 Portland Center Stage... and now we have PAE and Oregon Shakespeare Festival and next spring University of Portland?!?! I'm not complaining -- I love Cymbeline! -- but for one of the lesser known plays, it's certainly getting a lot of attention!

The good news is that it looks like even without going to Ashland, there's quite a bit of Shakespeare this year. Not enough for one play a month (because there's a dry spell November through January), but otherwise, it looks like an interesting year. Maybe a little heavy on the tragedies... but oh well.

*Oregon Shakespeare Festival in Ashland (not quite local... but I feel compelled to include them because, I mean, it's Shakespeare!)