By the Pricking of my Thumbs...

Disclaimer: I have thought about this play and even this production for a long, long time. That’s one of the perks of being the graphic designer, not to mention being able to sit down and talk to the director about what direction he’s going with the show. While I’ve enjoyed the “inside scoop,” I feel like I’m not able to write the review I should, because I am really not seeing it from the audience’s perspective. Let me just say up front, I really, really enjoyed this production and went to see it as often as I could.

Macbeth has long been my favorite Shakespeare play. I saw it in Ashland when I was about 13, and the atmosphere of that night has never left me. It was in the outdoor theatre at night, and there was real fire, and real bats flying around. I don’t know if they imported the bats or if that was just a happy coincidence. But the mood it created left an indelible mark.

Macbeth is primarily about atmosphere, if you ask me. It is a short, fast-paced, action-packed, bloody, violent, dark play. It has big themes and important lessons and lots to think about, but it doesn’t really give you time to actually think. And that’s OK, too. Not every play can (or should!) be Hamlet.

Portland Actors Ensemble’s Macbeth has all the basics – macabre setting (in a cemetery!) complete with bats at dusk, intense action, fast pace, elaborate costumes with a gorgeous Celtic flair to remind you this is the Scottish Play – and for anyone who hasn’t thought about Macbeth and studied it and overanalyzed it to death, it’s a great way to experience the play. It’s easy to follow even for those who don’t know the plot beforehand, never drags, and is an entertaining two hours.


Cecily Overman is the quintessential Lady Macbeth – intense, dark, and very much a driving force in the play. She also played an amazingly wicked Hecate – which gave me goosebumps. This doubling is spot on, and almost makes me rethink my aversion to the Hecate bits of the script. (Most scholars agree that Hecate is an interpolation and that Shakespeare didn't put her in there. Plus, she speaks in rhyming couplets, which is really hard to make sound evil, and gets annoying after a while.)

Michael Godsey’s Macbeth is appropriately ambitious, troubled and slightly psychotic. He's a great warrior who has stepped from his concrete, martial world of honor and heroism into something he can't explain, full of mysterious figures who speak in riddles and don't obey physical laws. He's out of his depth, but does his best. Michael does a great job making Macbeth complicated – he's a horrible person and does horrible things, but he's at least human.

The rest of the cast also have an intensity and forcefulness that is, in part, born of necessity when you’re playing outdoors without amplification to several hundred people a night. From that perspective, they all are to be commended. The words may go by quickly (possibly a little too quickly at times?) but you can hear all of them. On the other hand, in focusing so much on projecting so people on the other side of the cemetery can hear you, you sacrifice subtlety and nuance in the performance. It’s a calculated trade-off. Extra props to Tom Mounsey who gave MacDuff some depth without sacrificing projection.

Director Matt Pavik’s vision for the production is that Macbeth is first and foremost a Tragedy in the classic sense (a sympathetic main character going inexorably towards destruction). There’s something to be said for this approach. Shakespeare himself calls it a tragedy. The problem is in order for it to fit the classic definition, the main character must be sympathetic – the audience must like him. And that’s a tall order for Macbeth. I applaud Matt and the cast for attempting it, and some performances they succeeded better than others. But there’s a lot to overcome. You have to give Macbeth some positive and compelling motivation to act the way he does. They do this by emphasizing the relationship between Macbeth and his wife, which works brilliantly as long as the two of them are together… but which gets a little lost when Lady Macbeth isn’t on the stage. As magnificent and larger-than-life as Overman’s Lady Macbeth was, a lot goes on without her.

You also have to make sure that characters opposing Macbeth are less likeable than he is. Usually I find myself really liking the character of Malcolm. But this time I couldn't really connect with him. Andy Haftkowycz played Malcolm with a lot of energy and bombast, but very little depth (also a byproduct of the venue and volume?), and I didn't find him as compelling as I often see that character portrayed, but perhaps this is also to throw a better light on Macbeth. And then there was MacDuff, who I could never quite decide if I liked or not. Mounsey did a great job playing him; I just think the text doesn't really come down on one side or the other. Also, by cutting the scene at MacDuff’s castle where his family is slaughtered, it takes the sympathy for MacDuff down a notch. (I did find myself missing that scene later when MacDuff is being informed of what happened. I feel like the audience should have known, and that the later scene was missing some tension without it.)

In order to make Macbeth more sympathetic, you also have to somehow deal with the other characters’ responses to him, and I don’t know how to get around this. The Weird Sisters call him “wicked” as in “something wicked this way comes,” and the audience goes right along with it. MacDuff calls him "thou bloodier villain than terms can give thee out" and Malcolm refers to him as a "butcher." And the audience can't help but agree. Lady Macbeth is possibly the only character that actually likes Macbeth… and she’s pure evil herself, so that’s not a great commendation.

All this to say that I understand where Matt is coming from and his vision for the show, but I’m not quite convinced that it’s even completely feasible. And I blame that on Shakespeare more than anything else. Try as you might, it’s nearly impossible to really connect to a regicide and tyrant. And Shakespeare just doesn’t give us the space to get comfortable with him.

There were a few other nit-picky things….

Oddly enough, for a play that reeks of atmosphere and in a graveyard of all places, the production could have used a little more atmospheric help. The tents / changing rooms made an effective backdrop – a little too effective because they blocked out the view of most of the headstones while you were watching the play, so you lost a sense of perspective and feeling.

For me, the Weird Sisters just weren’t all that creepy. I get that there were practical constraints (they doubled the murderers, so they couldn’t have dramatic hair or make-up, and that’s just something that you get used to when doubling characters), but the only thing that made me think, “Oh, these people aren’t just people!” was Macbeth and Banquo’s reaction to them and the way the "use the force" on Macbeth and Banquo... and yet, that got a laugh every single time, so it didn't really help the creepy feeling. I never did figure out their complex (and beautiful) costumes... and wonder if perhaps they wouldn't have been a little more foreboding and mysterious if they, too, were simply shrouded as Hecate was.

The audience had to supply much of the “witchcraft” from their imaginations – even the iconic cauldron was just four chairs. I totally understand the highly minimalistic approach and the practicality of it in this setting, but perhaps this was a little too minimalistic? And logistically, how hard would it have been to hook a fog machine up to a battery and have it peeking out at the bottom of one of the tents to give the Weird Sisters a little atmospheric help? Honestly, the only thing that gave me shivers was Hecate... and I kind of feel like Macbeth in a cemetery should have a little more atmosphere. 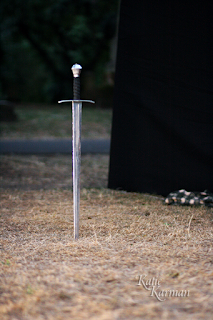 Also, for a play that’s steeped in blood, the audience also had to use their imaginations to supply the gore. OK. I get not going overboard. But even a little would have been nice. I’m not even thinking too much about Banquo’s murder or during the violent bits… but when Macbeth comes out after having just killed Duncan, his hands should be bloody. And when the murderer interrupts the banquet and Macbeth says, “There’s blood on your face,” I think blood would be appropriate.

I’m being SUPER picky here. Again… I’ve thought about this too much. I did enjoy it… very much. I think Matt Pavik put together a great team, and they all did a superb job within the constraints unique to outdoor theatre. I feel very privileged to have had the opportunity to watch parts of the process from a distance and to see what all goes into bringing such an amazing story to life. Well done, everyone!
Posted by Katie at 10:18 PM 1 comment: