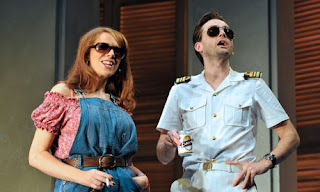 Epic win on the Christmas present front: my friends surprised me with a viewing of the Much Ado About Nothing "movie" last night. Complete and total surprise, because I didn't even know that it was released. But on to the review:

The first thing you should know is that it's set in the 1980s... which gets quite overpowering sometimes. The short shorts on guys, the stone-washed jeans, the obscene amount of pink on everything, the Lady Di reference, the Indiana Jones costume, the world's puffiest wedding dress, the Rubiks Cube, the cigarettes everywhere, the Thriller dancing, the cross-dressed costume... 'Nuf said.

David Tennant is brilliant as Benedick, of course. He handles Shakespeare's words so naturally that you forget that the language is supposed to be "old" and "hard to understand." (Side note: Shakespeare's language is not hard to understand or highbrow when done right... but with some actors you have an easier time remembering that than with others.) But perhaps his best moments comes when he pauses from the words themselves and just looks. The man speaks volumes with his facial expressions. He doesn't tend to go over the top, either. Benedick delivers one monologue entirely while sitting propped against a pillar with a soda (beer?) can and a funky straw. And it's brilliant.

Catherine Tate doesn't have a problem with the language either, but there are moments when her Beatrice lacks sparkle. She's good at the biting, sarcastic Beatrice of the beginning, but once she falls in love with Benedick, she starts acting rather Valley-Girl... which seems too young for her. As the story progresses and things start to get more serious, her Beatrice comes across like an emotional train wreck. In the scene where Benedick and Beatrice talk after Claudio has renounced Hero in front of the whole church, Beatrice goes from heartbroken and sad to giddy and girly when Benedick tells her he loves her, and then back to almost hysterically sad when she tells him to kill Claudio. To me, this feels more like the response of a 16-year-old than an adult.

Even so, there are priceless moments with Catherine. Beatrice's "sick" scene -- where she comes to talk to Hero right before the wedding -- was hysterical. The sneezing every time someone said "Benedick" was perfect. And the bit towards the beginning when the Prince asks her to marry him is no end awkward, which is what it should be.

On top of all that, David Tennant and Catherine Tate obviously have chemistry. In their scenes together, their timing is delightful.

The best moment of the play (as seems to be the case with any production of Much Ado) is the bit where Benedick "overhears" the Prince, Claudio and Leonato talking about how much Beatrice loves him. The staging -- there's a rotating stage with three columns, and in this scene painters and buckets of paint -- was amazing. Benedick, while trying to listen in, ends up covered in paint, which is so amazingly funny that it almost detracts from the funniness of his lines at that part. But David, ever the showman, doesn't rush the lines.

There are many other amazingly wonderful moments. But. But there's also enough costume issues and uncomfortably inappropriate bits that I can't recommend this to anyone, really. Catherine Tate always seems to be falling out of her top. At the costume party at the beginning, Benedick comes as... I don't know what. A hooker? Miss Piggy? It hides who he is all right, and as the audience you can totally believe that Beatrice didn't know who she was talking to... but I never really wanted to see David Tennant cross-dressing. The night before the wedding turns into a bachelor party and a bachelorette party, and even though they showed everything when Claudio "overhears Hero talking to a guy out her window," because of the setting, I wasn't convinced that there was enough motive there for Claudio's reaction. (My brain automatically went to "And the bachelor party was OK for you...?") (And because I'm trying to keep this blog family-friendly... I'm not even going to mention some of the other stuff.) Something else that could be a bit of a turn-off was the amount of "drinking" and "smoking" going on.

It's tragic that something with such potential has to be so raunchy. The casting for the whole thing is solid. Elliot Levey plays one of the best Don Johns I've ever seen -- totally believable, straight-laced, uptight, but a nasty piece of work. Claudio (Tom Bateman) is just the insecure, gullible type who would (a) fall in love with someone he doesn't know, (b) believe the worst of her, and (c) go off the deep end about it. John Ramm makes a great Dogberry, although the officers of the watch almost outshine him at times.

Here's hoping that someday good actors will do Shakespeare brilliantly without all the added junk. It can be done, and it should be done. Shakespeare deserves it.
Posted by Katie at 11:32 AM

Email ThisBlogThis!Share to TwitterShare to FacebookShare to Pinterest
Labels: Much Ado, review