Hamlet... in a Cemetery 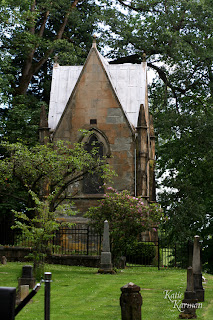 To begin their 43rd season, Portland Actors Ensemble took a straightforward, streamlined Hamlet and set it in Portland’s oldest cemetery – Lone Fir Cemetery. The setting was magical. To watch a play that echoes unceasingly with the inevitability of death while surrounded by tombstones is an amazing experience.

The cast had to work hard to live up to the setting, and in many cases they succeeded. The entire production was fast-paced and intense. Occasionally the intensity seemed over-the-top for those of us with front-row seats, but it was necessary with audiences in the hundreds night after night. 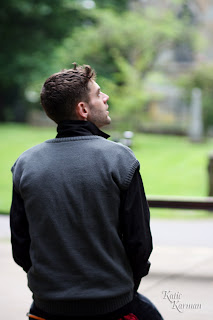 Doug Reynolds was a convincing if young-feeling Hamlet. He made us feel the pressure the character was under – the pressure to be the perfect son (both to his demanding, dead father and to his self-centered, oblivious mother), the perfect prince, and the perfect boyfriend. He had to keep up appearances the entire time and had no one that he could be himself with. Ophelia (played by Kayla Lian) would have been the one person Hamlet could have poured out his heart to, if her brother and father hadn’t gotten in the way. Then Hamlet recognized that she was a chink in his armor and he couldn’t afford the distraction, which provokes the “Get thee to a nunnery” scene. But we really did feel that he loved her very much.

Kayla Lian did an amazing job of showing the strain that leads to Ophelia’s madness. It was very clear that, despite his many shortcomings, she loved her father very much. In fact, the whole family dynamic with Polonius, Laertes and Ophelia was touchingly and beautifully done.

Polonius (Curt Hanson) was perfect. He was a believable rather overbearing father and trusted advisor to the king, while at the same time being a tedious windbag. Hanson’s comic timing and delivery were brilliant.

Mark Rothwell’s performance of Claudius was remarkable, also. Every time he was on stage I hated him a little more… and when you’re playing a villain that means you’re doing a good job. He reminded me of a slug, or something that gives you that slimy feeling. He was self-centered and evil with a thin veneer of charm and polish – a perfect stage politician. 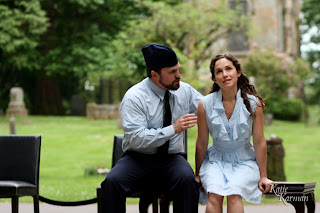 The production was filled with wonderful moments – many of them brilliantly awkward and funny. Rosencrantz and Guildenstern excelled at awkward, as did Adam Thompson playing Reynaldo (and various butler-esque minor moments). Charlie Pierce made an excellent gravedigger… and watching someone play with a skeleton in a cemetery was an experience I won’t soon forget!

My main concerns with this production were with bigger conceptual things. For one thing, the way the players were presented bothered me – turning the leading player into a woman and implying some past between Hamlet and her didn’t help my view of Hamlet’s character. Say what you want about princes or college students or whatever, I still feel like it weakened the character and called his relationship with Ophelia into question somewhat. With that kind of history, you almost feel like Laertes and Polonius were right to tell Ophelia to keep her distance.

Director Bruce Hostetler also majorly minimized the Horatio / Hamlet friendship and turned Horatio (Scott Fullerton) into a glorified babysitter the entire time. This did help to isolate Hamlet and require him to put up even more of a façade, but when everyone in the play dies, you kind of want the one person left on stage to be someone you’ve come to love and sympathize with. This didn’t happen. 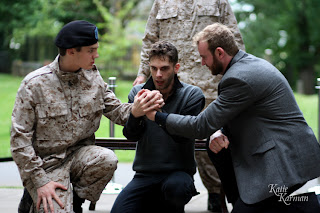 In fact, the entire second half was plagued with continuity issues because of the way the play was cut down. Now, I totally understand the need to cut the massive play so that people are able to sit through it. And I don’t know how I could have done it myself. But I would not have taken out Hamlet’s encounter with Fortinbras’s army (Act 4 scene 4 – the whole impetus for the “How all occasions do inform against me” speech) or Hamlet’s ill-fated trip to England. I was not convinced by the “Oh, he just decided not to go all of a sudden” way that was handled. When Hamlet forges the letter that sends Rosencrantz and Guildenstern to their deaths, it is a significant step in his journey, and not one that can be left out.

The ending (after everyone dies) was also cut down significantly, leaving out what I think of as the zinger – the “this was the point of this story” moment – and weakening the end considerably. I missed
“So shall you hear
of carnal, bloody, and unnatural acts,
of accidental judgments, casual slaughters,
of deaths put on by cunning and forced cause,
and, in this upshot, purposes mistook
fall’n on th’ inventors’ heads. All this can I
truly deliver” (5.2.422-428).

So while it was overall a good performance and the actors played their parts very well, the whole thing lacked a cohesive feel and a main point that resonates with the audience as they drive home.

The cemetery was very, very cool, though.
Posted by Katie at 11:12 AM