Whirligig of Time -- Perception and Reality in Twelfth Night 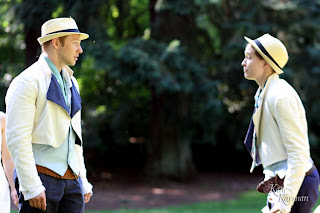 I had a hard time starting this review of Portland Actors Ensemble’s Twelfth Night. On the one hand, I absolutely adored the production. “Beautiful” was the word I used the most when describing it to friends. But I find that I run out of adjectives very quickly with a play like this: It’s brilliant: the costumes are stunning, the music sensational, the sets lovely, the timing perfect, all the characters amazing, and every performance inspired. I loved it, and can think of very little that could be improved. So I feel like I don’t have a whole lot to say.

On the other hand, the play has produced deep thoughts in me… and I’ve been tempted to wax philosophical. But that opens up a Pandora’s Box of ideas that have less to do with this particular production. So I have too much to say… and that too much is not quite to the point.

But… this is theatre. And the purpose of theatre is communication. And communication is worthless if it doesn’t communicate Ideas. Shakespeare’s plays – even the comedies – are not just plots and characters and settings, but vehicles for Ideas. And if a particular production (this one, for instance) can spark these big Ideas in a viewer, then it has done its job and done it well. So, really, the philosophy isn’t so much off topic after all. 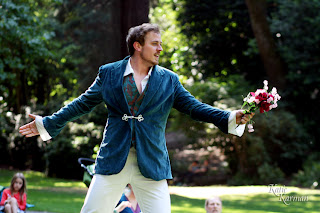 A friend overheard another audience member say, “Isn’t it amazing how they make it feel so contemporary and modern?” I laugh, not because whoever said this was off base, but because they were so spot-on. But here’s the thing: It’s not this production. Sure, director Avital Shira had her stellar (ooh! There’s another superlative adjective!) cast deliver the lines with a fresh, modern feel. But the reason it works so well is that the characters that Shakespeare created are as much at home in the 21st century as they were in the 17th. People haven’t changed. Guys were melodramatic, lovelorn idiots then (Orsino), and they are now. Girls were apt to fall quick and hard for someone at the least provocation (Olivia), and they are now. There will always be self-important, pig-headed jerks in positions of authority (Malvolio), and we will always rejoice when they get their comeuppance. 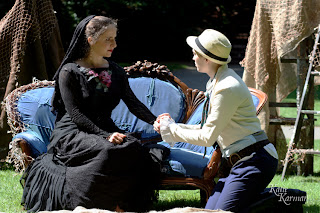 Twelfth Night works so well because we all know the characters from our own lives. How many long conversations have I had with my Orsino guy friends, so blinded by what they want that they can’t see what they could have? How many times have I, myself, been Olivia – wanting the unattainable and acting like a complete idiot in an effort to attain it?

No one escapes censure in Twelfth Night. And that’s what makes it work so well. It’s a play about contrasts – wisdom and folly, men and women, perception and reality – but mostly perception and reality. We all have a preferred version of reality… the way we’d like things to be. And it’s this perception that blinds us to the way things actually are. 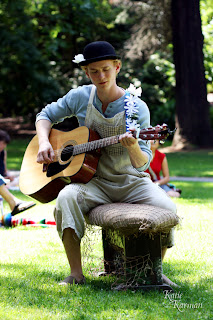 In true Shakespearean tradition, the only person who really knows what’s what in the play is Feste, the fool, played charmingly in this production by Carson Cook. Cook made it obvious that he knew exactly what was going on – that “Cesario” is really a girl; that Orsino’s love for Olivia isn’t going to last; that Olivia’s mourning for her brother is more of an excuse (though perhaps not a conscious one) to be moody than true, deep-seated grief. 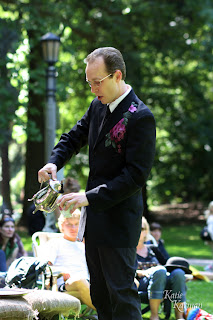 Of course, Shakespeare’s device (making the “fool” the wise one) brings up the contrast between wisdom and folly, and reminds us that when we think we are wise, that’s when we’re the most foolish. This comes out in practically every character in Twelfth Night to some extent or another, but most in Malvolio (played by Arthur Delaney). Malvolio’s perception is that everyone loves him (despite much evidence to the contrary), and this makes him particularly susceptible to the practical jokes played on him by Maria (Jennifer Elkington), Sir Toby Belch (Will Steele), Sir Andrew Ague-Cheek (Max Maller) and Feste. Once again, in true Shakespearean tradition, the villain is hoist by his own petard, and when the whirligig of time brings in his revenges, we may feel a little sorry for the “madly-used Malvolio,” but we recognize that he brought it upon himself. Delaney did a particularly good job throughout of making Malvolio so obnoxious that I, like Maria, could “hardly forbear hurling things at him,” and that made the ending more palatable.

I could go on in this philosophical bent, but I don’t want to try your patience. So I’ll end with a few notes about this production. 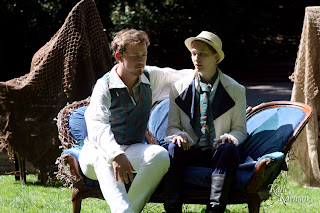 Zach Virden made an awesome Orsino. And Britt Harris did a lovely job as Viola / Cesario. The two of them have some delightfully awkward moments as the relationship between master and confidant threatens to turn into something else. In fact, the entire play is filled with wonderful awkwardness – which is, I suppose, one of the chief reasons a girl dressed as a guy worked so well in so many Shakespeare plays.

I would be remiss if I didn’t mention the beautiful music written by Amir Shirazi and very well performed by the entire cast. Bravo.

For those of you who are wondering about appropriateness and such, just know that at one point Olivia comes out wrapped in a sheet (a very long, very opaque sheet… but still… it implies… you know). I understand how they came to that interpretation, though I don’t think it’s strictly necessary. Also the “intermission music” is a slightly risqué drinking song. Those are my only real concerns… and by comparison to the rest of the show, they are very small.

Bravo to the entire cast and crew for an outstanding job and one of my favorite productions all year! And thanks for making me think!


This production runs through Labor Day weekend. Visit www.portlandactors.org for dates and locations.