Princes and Theatre Groups Have to Grow Up 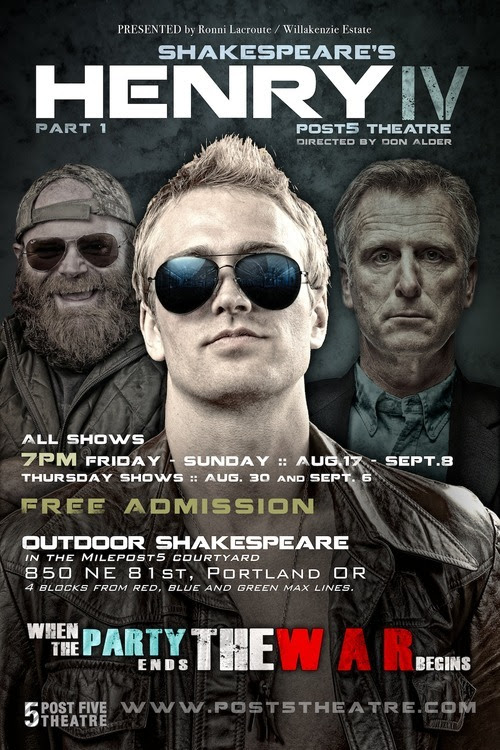 I realize that your Joe Blow Theater Patron couldn’t really care less about the text, seeing it – if he sees it at all – as only the backdrop to an entertaining evening out.

But especially where Shakespeare is concerned, messing with the text bothers me every time. Why? Because Shakespeare worked hard to make his plays “hold, as 'twere, the mirror up to nature; to show Virtue her own feature, scorn her own image, and the very age and body of the time his form and pressure.” He carefully crafted his words, characters and scenes to get at something specific. And when that is ignored, or worse still, deliberately altered, a great disservice is done to the play, the audience and even the actors.

Now, don’t get me wrong – I realize that there’s a lot of room for interpretation and individuality when producing Shakespeare. So I’m not at all bothered by variant readings or alternate views of a play. But when one’s concept or one’s own ideas about how things could be done trump the text, that’s where I draw the line.

And that’s what bothered me the most about Post5 Theatre’s Henry IV Part 1 – it messed with the text, and because of that, missed the whole point of the play. Subtly (but deliberately, because you can’t switch the order of scenes around without doing it on purpose) they shifted the focus from Prince Hal to Falstaff… and instead of a Growing Up and Taking Responsibility Story, it became so much less. The new “final scene” (they ended with Act V Scene 4 instead of 5) left me feeling like the take-away was “Living a debauched life isn’t so bad as long as you know the right people and are in the right place at the right time” – although I will say that I don’t feel like the entire show backed that point up.

The problem is that the ending of anything is extremely important. In a play, it’s the last thing the audience sees. It’s the image that sticks with them. Shakespeare started and ended the play with the King (Henry IV) speaking, and I think it’s significant that the last voice we hear is Hal’s father accepting him and finally giving him the respect and responsibility that belongs to a prince. You miss all that when Falstaff gets the last word, and it isn’t a sincere one.

The very modern, rather American setting also contributed to the obfuscation of Shakespeare’s point. I lost any sense of royalty, of the fate of the nation hanging in the balance. And giving Henry IV the feel of a president instead of a king diminished the importance of the worthiness of the heir to the throne. Presidents don’t pass their office on to their oldest sons. In fact, as the play went on, I grew more and more convinced that this wasn’t about kings, but about crime lords or rival gangs. The ubiquity of the biker theme didn’t help this at all.

Why should Hal grow up and set aside his “friendships” with his biker buddies? Why should he clean up his act and stop all the drinking, drugs and debauchery? What’s the incentive? I got absolutely no sense of “someday you will be king, and you need to start acting like one.” In fact, when Henry IV is dressing Hal down in what should be a very moving scene and a definite turning point in the play, the king pulls out a bottle of Johnny Walker and starts drinking. Maybe I’m too picky, but my first thought was, “Double standards much?”

The overriding thought behind this production seemed to be (in my humble opinion), “We, the cast and crew, are going to have fun!” Great. I have nothing wrong with that. I have often dreamed of doing theatre, first and foremost because it looks like so much fun. But that fun must be tempered by the text. You have to have some reason for doing something other than, “It’s fun.” When you start making decisions based on what would be “fun,” you always have to double check them against the text.

Sure, to some people it might be a lot of fun to portray the Douglas (Samuel Dinkowitz) as the head of a biker gang. But in doing so, you lose the idea that he represents the power of Scotland, which, last time I checked, is a little more than just a biker gang.

In this same vein, I found the extra-textual asides (random modern non-Shakespearean insertions) amusing at first, but they quickly got tedious and detracted from the beauty of the language. While it might be fun to put them in, is it worth the constant reminders to the audience that Shakespeare’s language isn’t the same as today’s? Shouldn’t you be trying to help the audience feel at home in the language and forget that it’s different?

I don’t blame any of this on the actors at all. In fact, much of the acting was superb. Orion Bradshaw’s Hotspur was fiery and impetuous and so intense it was almost frightening… when it wasn’t funny. Brenan Dwyer played up to him as Lady Percy and complemented his passion nobly. Phillip J. Bernes was marvelous as Francis the drug dealer, but even more impressive as John of Lancaster – a bit part, but an important one. Michael Godsey was thoroughly conniving and evil as Worcester, making Hotspurs passionate rebellion look almost innocent by comparison with his own cold-blooded, calculating villainy. Jeff Gorham made a respectable King (or President?) Henry IV and brought an air of maturity and gravity to his part.

I save Ty Boice’s Prince Hal for last because, though he did an excellent job, he just wasn’t quite able to assert his presence over that of Falstaff (Rusty Tennant). Again, it felt like the “let’s have fun with this” mentality won out over the text, because Falstaff just turned into so huge a presence that Hal’s part was necessarily diminished.

This is possibly the genesis of the question of who the play is really about and the muddling of Shakespeare’s point. There is a delicate balance between Hal and Falstaff as characters. Get that out of alignment, and the whole play shifts.

The problems I have with this production come more from how the play was conceived by director Don Alder (and possibly by the vision of Post5 Theatre in general?) than from individual performance (with the possible exception of Tennant’s Falstaff). And maybe I’m being overly critical of the whole thing. I doubt many people even realized that the production missed the whole point of the play. But isn’t that even more reason to uphold the text? Don’t you have a responsibility to your audience to give as accurate a representation of the play as you can?

Post5 Theatre reminds me a lot of Prince Hal, actually: They have a responsibility – a responsibility both to their audiences and to the plays themselves. They also have a lot of potential to be able to fulfill those responsibilities. But until they stop doing things “just for fun” and start giving the texts the respect they deserve, they will not be major players in the theatre world.